When long winter eventually ended, season for landscape photography begins. As a kind of  my ritual, I usually go to Johnston canyon as a starter of my season. It is short and easy hikeon paved trail from small hiking to  caniyign. So it can’t be even training but somehow,  I start the season from the trail.   The second water fall on the Johnston Canyon is iconic location and so msny similar photos are around. I really do nit like photographing iconic spots. But this time time, I had had plan which was using only pinhole camera on hiking. Also I had a particular image of the second water falls in my head, taken by the pinhole camera. This is the one.

As I notified in my last blog I would like to show the Film vs. Digital part 2 in this blog. This time is a comparison of pin-hole images.

I still listen to vinyl records because I can feel more sense of fulfillment and euphoria than when I am listening to CD (MP3? no way!). Vinyl or any analog audio devices have noise and distortion (over clipping). They should be minimized as low as possible but not avoidable. However, the noise is not a totally unacceptable or unforgiving enemy…because I guess the noise is not that unpleasant. Same thing about the distortion. Actually, it give a certain warmth and punchy to the sound. They can be a part of musical sound. On the other hand, noise and distortion of digital sources are so unpleasant and annoying. They do not have musical quality anyway.

Left is film and right is digital. Both images are taken with the same pin-hole. Please look at sky. Highlights are washed out in the both images. However, the washed -out part of the film is not as harsh as digital one. If I would say “this is my photographic expression”, the comment can be accepted. In general, I prefer film in this case. 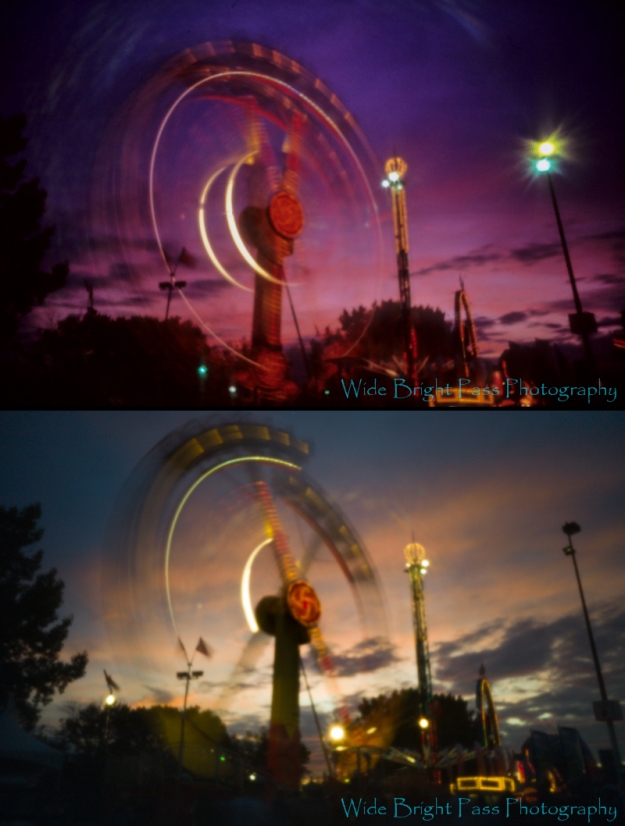 Taken at Calgary Stampede 2011. Obviously film is more dramatic, but I guess there was about 10 min time gap between the digital image which I took first and the film. The 10 min difference in this time of the day may bring huge difference in lighting condition. So this is not a fair comparison. Just an idea.

In my limited experience of pin-hole photography, the pin-hole seems to work better with film. Grain of the film gives a certain character and the uncontrolled exposure often gives ethereal feel to images.