In February, fairly big photographic festival, called Exposure Photo Festival is held every year in Calgary, Canmore and Banff. That is the time, I drive around and walk around, and visit photographic exhibitions as many as possible. One thing I noticed about Exposure Festival is so many photographers still use film and exhibit their very unique images. Especially this year, I guess about 70% of the exhibitions were photos from conventional film. It is amazingly high percentage.

The other news related to film is Fujifilm received Academy Award in 2012. The development of archival film, ETERNA-RDS by Fuji Film was recognized as significant contribution to movie industry for preservation of valuable motion pictures.  I thought this technology is basically for classic movies; however, the fact is recent movies digitally filmed, too, have been converted to this technology for long lasting preservation. I always thought digital is the ultimate method to preserve images, but it does not seem true. What a paradox!

So I and some of my friends, Craig Taylor, Heather Simonds, and Samantha Chrysanthou had a little film development session  in January.  While I was brushing up my knowledge of film processing, I found many techniques I have not tried. Then I saw the photos processed by different techniques in the Exposure photo festival. They made me think what being creative means to me. Images by film usually stimulate me more for sure. 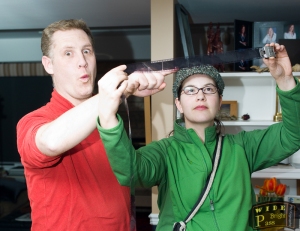 Sam is checking the film she has just developped.

Heather’s first attempet to load medium format film to a development tank in a darkbag. It took 15min. Not bad for the first time-:) Mamiya 645pro, Ilford FP4 B&W film. Scanned by a flatbed scanner, which reraly impress me.

Next time, I will share some of Heather’s and Craig’s photos.